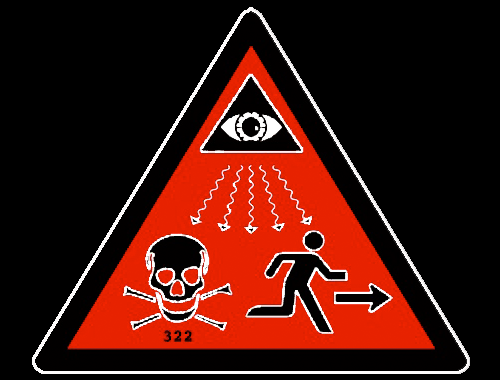 
Medeology Collective
Special Thanks to the Savannah College of Art and Design for Presidential Fellowship funding to Alessandro Imperato.

EMR took the forms of mass media propaganda and remix cultural ephemera in order to explore the writing, reading, mis-writing and mis-readings of signs. The overall aim was to reveal the constructed nature of mass communication in the media and politics. Mis-messages, mess-age, messed-up and missing meanings were at play. The possibility of mis-reading and mis-interpretation due to the multivalent and polysemic nature of signs was given emphasis, especially in terms of Roland Barthes’ notion of the denotation/connotation dialectic in semiology. According to Barthes’, the denotational capacity of a sign must be theoretically deleted from the equation in order for connotation to work. Logos, branding and globalization rely on the denotational capacity of signs, although the cultural, national and linguistic differences involved in the reading process can complicate the corporate and political desirability of fixing meanings and power. Mis-interpreting the intentionality of the author as a factor at play within the performance.

Taking the themes of mis-information, persuasion and propaganda, the performance involved a live-video dialogue between Jim Gladman and Alessandro Imperato in the format of a two-screen spatial montage. Each performer was assigned a screen and improvised image juxtaposition in relation to the other’s. There are many exponents of Culture Jamming and many techniques, from William Burroughs’ cut-ups to the TV sampling of the Emergency Broadcast Network in the late 1980’s, as well as contemporary VJ practices that precede and developed the field of media critique as alternative media. The medium of the mass media can reveal hidden and latent conditions within society when re-contextualized and deconstructed. Like media archeology, the detritus of the images society throws away can reveal and expose cultural, ideological and economic processes. Maybe the memes of the media virus are the disease and not the cure?

In ‘MediaMediums’ the artists who are trained in media, advertising, semiotics, deconstruction and other arcane black arts, acted as media mediums performing ‘summonings’ or ‘revelations’ of media’s obscured interior drives. Through a dualistic methodology they first conducted exhaustive collection and analysis of sampled visual media (television, film, online content etc.). An enormous database of samples were accumulated and categorized. Each member of the duo was unaware of the content of the other’s collection.

Performing live, they juxtaposed, called-and-responded, and improvised their respective samples against each other. The performative nature of this ritual disarms the left-brain analytics and spontaneous interaction gives rise to the ‘media subconscious’ or Summoning of the Media Spirit. Although the duo were actively making decisions during the performance, the ‘Media Spirit’ took over frequently - reversing the flow so that the duo simply become vessels through which hidden agendas, collective obsessions/fears/neurosis/psychoses become manifest. The ‘collective mis-wisdom’ was revealed and duly recorded by the duo for later interpretation.

This left-brain/right-brain approach is not dissimilar to religious, mystic and shamanic technologies: Learned Ones select ‘sacred’ symbols, sounds, images, narratives. Then through enacted ritual these elements are combined and repeated in an event that amplifies the semiotic/mythic/cultural harmonics, resonances and overtones until they dominate over the banal surface of the medium. This ‘revealing’ brings forth post-linguistic messages that may be our collective media-consciousness, madness, or simply the delusion of the receiver. By deliteralizing and recombining media in this ritualistic, process-over-product act, one can find ‘enlightenment’ - even if it is itself an illusion.

The Installation environment was created by Kelley McClung and the physical structural elements enhanced and contributed to the performance. Jim Gladman and Alessandro Imperato were slowly revealed behind two strategically placed scrims/screens. The performers were revealed in a red wash of top lighting, with fog surrounding them. This was intended to create and enhance the illusion of the dualistic methodology provided through the content and context of the work. Just as a genuine or charlatan spiritual medium channels the dead or those who have passed over. Is the message ‘in the medium’ or ‘media’, or in this case: ‘of the medium’. Is it real or a theatrical illusion? Can it be both?

There was also the possibility of revealing and concealing the ‘men behind the curtain’. This was also intended to reveal the artistic means of production in the Brechtian sense, a form of media x-ray. This will involve only showing elements of the performers, whether faces or hands. The form of revealing and in what manner the spectator viewed the ‘men behind the curtain’ incorporated many subtle variations.

It was important that the focus be on the content of the projected material and the ‘contact improve of digital media’ or ‘call and response’ process, but there were moments that the performer was revealed and concealed. This was a variable that took the work to another level of media magic.